Inauguration Ceremony of the New Complex of the Mauritius Oceanography Institute 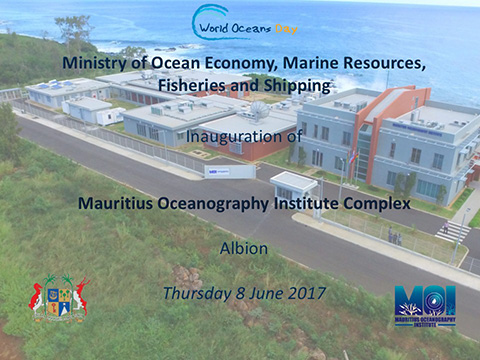 In the context of the celebrations of the 2017 World Oceans Day, the Ministry of Ocean Economy, Marine Resources, Fisheries and Shipping proceeded with the inauguration of the new Office and Laboratory complex of Mauritius Oceanography Institute in Albion, Mauritius.  The chief guest for this event was the Right Honourable Sir Anerood JUGNAUTH, GCSK, KCMG, QC, Minister of Defence and Minister for Rodrigues.

The ceremony took place in the presence of Hon. Ivan Leslie Collendavelloo, Deputy Prime Minister, Minister of Energy and Public Utilities,Hon. Premdutt  Koonjoo, Minister of Ocean Economy, Marine Resources, Fisheries and Shipping, Members of the National Assembly and other foreign and local dignitaries from the public and private sectors.

The new website of the Mauritius Oceanography Institute was also launched during that ceremony.